The Candlelight processions wil be held at the shrine from May through October on the 13th of each month.  Look for details.

We welcome you to join us on the 13th day of each month starting in May through October at 8:00 pm for a candlelight procession.

The Candlelight Vigils processions predated the shrine.  The first candlelight vigil was held on October 13th 1962, when over 5000 people responded.  It was from this event that the Crusaders of Fatima were convinced that they could support a shrine here.  The vigils commemorate the six apparitions that took place in Fatima in 1917.  There is a candlelight procession every night at the shrine in Portugal.  Our Lady asked the children in 1917 to come here on the thirteenth of the month for the next six month starting in May.

This devotion service is our most popular and well attended we begin on May 13th the anniversary of the first apparition at 8 PM.  It is presided over by a member of the Clergy who give a short presentation on related topic.  This is followed by the candlelight procession around the beautiful grounds and end up at the shrine for Benediction of the Blessed Sacrament, the Divine Praises and plenty of Singing.  You can download the hymn sheet and program below. 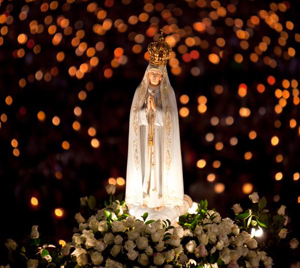