History Of the Shrine

The Fatima Shrine Boston is situated on the grounds of the former Passionist Monastery, retreat house, and the former Parish of St. Gabriel’s. The Shrine began as an inspiration by a group of laymen who frequented the Monastery by attending annual retreats.Fatima Shrine Boston They formed a First Saturday Communion of Reparation group in 1957. They called themselves the Crusaders of Fatima and began holding First Saturday devotion on the Monastery grounds, with Mass and Rosary processions followed by a breakfast.

They began with a 200 men membership that attended their early meetings. By 1962 they decided to expand their devotions to include an annual candlelight procession in the month of October. At their first event they attracted over 5000 people and it was from this event that inspired them to build a Shrine. 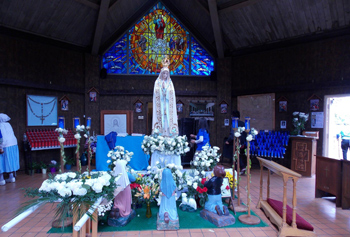 In 1965 they incorporated as a nonprofit, organization as the Crusaders of Fatima Inc. with the sole purpose to secure funds for the erection and maintenance of a shrine in honor of Our Lady of Fatima. It took them about 5 years from the inception to complete. Construction of the shrine began in August of 1968, and by the October candlelight procession that year they attracted 10,000 people, with the bare bones of the shrine’s structure exposed.

The Shrine officially open the following December of 1969. The group has been meeting here ever since.